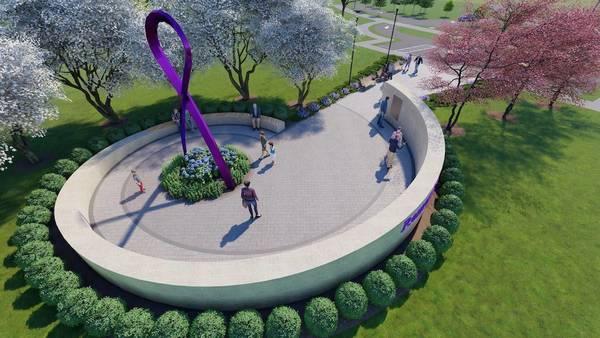 BLACKWOOD, NJ– The Camden County Remembrance and Hope Memorial at Timber Creek Park is now open up to the general public.

Upon arrival, it will be tough to error the large purple ribbon, the universal symbol of opioid dependency awareness, standing beside a sloping wall and benches for visitors to sit and reflect.

According to the Office of the New Jersey Attorney General, over 1,600 presumed overdose deaths have actually occurred in Camden County since 2013. In Camden City alone, there have been 175 suspected overdose deaths between January and July of this year.

During an unveiling event Monday afternoon, Ray Massi, the Deputy Director of the Liberty Mid-Atlantic High Intensity Drug Trafficking Areas, spoke of his own battles with opioid addiction, which also took the life of his kid, Shain, on Aug. 29, 2019.

“I don't care what individuals believe, or people say, behind my back. I understand that this in time too, will pass as people become a growing number of conscious. I do not care who judges me and I didn't care who judged my kid. Individuals who actually mattered [were] the overwhelming numbers of loved ones and friends from the church and from other places that showed up and showed respect to us and used their aid and help in any way that they could,” stated Massi, who formerly served on the Camden City Police Department.

Massi, who said he adopted Shain from an orphanage in Russia, said he and his spouse were blessed to have actually spent 19 years with their son.

“We believed we were rescuing [him] … and in many methods he saved us,” Massi included. “He altered my heart.”

A 2019 survey– conducted by both Rutgers-Eagleton and Fairleigh Dickinson University– exposed that approximately a quarter of New Jersey homeowners or their family members had actually taken a prescription opioid painkiller in the previous year. 7 in ten participants “rated prescription drug use as a severe issue in their neighborhood,” according to county authorities.

“Every New Jerseyan lost to an overdose is a liked one gone prematurely. We're dedicated to doing whatever we can to #EndOverdose,” he stated in conjunction with the signing.

The memorial at the 138-acre park in Blackwood was spearheaded by Dominic Vesper Jr., with assistance from the Camden County Addiction Awareness Task Force. Freeholder Jeff Nash likewise credited the county's structures and operations department, public works, health and human services, the improvement authority, the parks department and the department of special occasions.

Gloucester Township Police Chief David Harkins, also an irreversible Deacon for the Diocese of Camden, was on hand today to lead those collected in an invocation.

“Dear God of all, we come to you today to honor and remember our loved ones who have become the victims of overdose,” he said in the prayer. “Our grief understands no depths as we think about the preciousness of the lives lost and the cruelty of the disease of dependency.”

A video making of the memorial is available here.

“Until we end this preconception [of opioid addiction] individuals will suffer, and we will lose enjoyed ones,” Freeholder Carmen Rodriguez said in short remarks as the event closed.