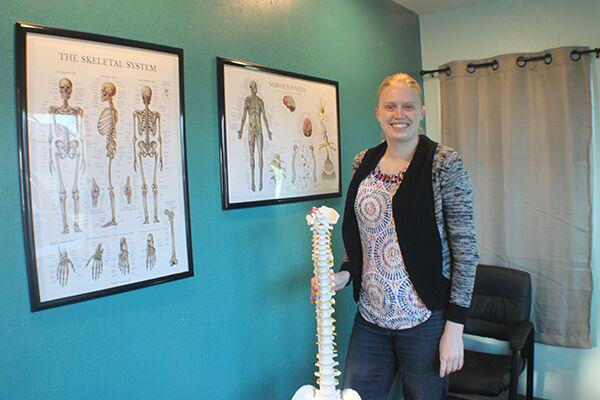 “If pain is preventing you from doing something you enjoy, for example, bending down to garden, then we can work towards getting that back for you with chiropractic care,” said Anderson, who graduated from Belle Fourche High School in 2012.

Many people seek a chiropractor when they are in pain. Anderson says when we experience pain, the human body is already going through neurological changes. Common complaints Anderson hears from patients include “tech neck,” the neck pain, headaches and stiffness caused by looking down at cell phones and back pain from sitting at a desk for long periods of time.

“These ailments can easily be corrected with chiropractic care,” said Anderson. “Sitting is the most load bearing activity for a spine. In addition to getting up and walking around, you can go to a chiropractor to get yourself aligned.”

Anderson’s journey to becoming a chiropractor began in middle school. She began running cross country for Belle Fourche and was quickly named to the varsity team. Her freshman year of high school, Anderson dislocated her kneecap during the conference meet. She could no longer run competitively. After surgery and many months of rehab, Anderson had a new goal.

“That is when I knew I wanted to be a doctor and help people just like my medical team was helping me,” Anderson said.

In college, Anderson pursued a pre-med concentration at Black Hills State University. After graduating from BHSU, Anderson completed her doctorate of chiropractic in December 2019 at Northwestern Health Sciences University in Minnesota.

Then, the pandemic hit.

“The [Black Lives Matter] riots were happening at that point, too. For safety, I thought we should move home to Belle Fourche,” said Anderson, who is married to Dustin Anderson.

In January, Anderson opened Gentle Touch Chiropractic PLLC. She chose the name Gentle Touch to honor her grandmother who ran an assisted living home with the same name in Platte, S.D.

“I wanted to keep that name going,” said Anderson.

Anderson enjoys meeting new patients and is committed to understanding and treating each individual according to their needs.

“Each person heals in a different way,” said Anderson. “With chiropractic can, I can adjust or try a different style to help people heal to their full potential.”

To read all of today's stories, Click here or call 642-2761 to subscribe to our e-edition or home delivery.