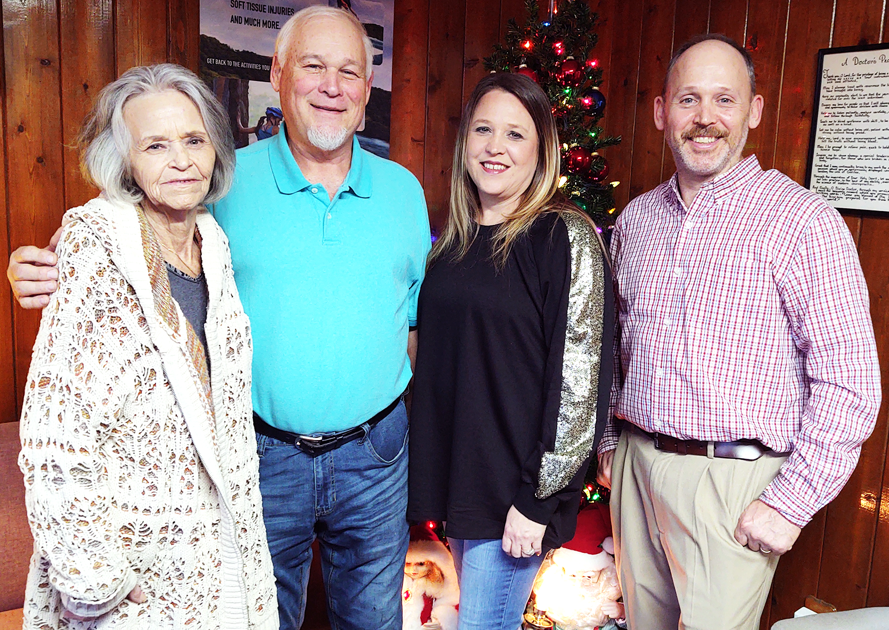 CROSSVILLE — Dr. Paul Protz came to Crossville in December 1970 to fill in for Dr. W.D. Watts at what is now Crossville Chiropractic Health Center.

What Protz and his wife, Imogene, thought would be a temporary position became permanent, leading to 50 years of devotion and service to Crossville and Sand Mountain.

In December, Protz’s family and staff gathered to celebrate his 50th anniversary at his office at 14511 Alabama Highway 68, next door to Crossville Town Hall.

Paul Protz is from Pennsylvania while Imogene is from Kansas City, Kansas. They met while attending Palmer College of Chiropractic. They graduated together and moved to Montgomery.

A call from a friend and fellow chiropractor in Rainsville changed the course of Protz’s life.

“He said Dr. Watts needed somebody to take over his office for a while, because he’d had a stroke and he was in the hospital in Birmingham,” Protz said.

“I said sure, we’ll come up. And so we came up and didn’t meet anybody but Mike Watts. We moved into the house [provided by Watts]. That was on a Sunday, and I started practice the next day [in December of 1970].

“I didn’t know how long I’d be here. Temporarily until he recovered from his stroke. Well, he got out of the hospital and he was paralyzed in his right arm, so that ended his practice.

“He asked me if I would take over and I did, and he was very good to us, like his own kids. I worked and he paid me. I paid no expenses at all. I made half the money and he took half. We lived in his house, he fed us, he paid everything. He was really good to us, him and his wife.”

Besides being a chiropractor, Watts served the town as a council member and mayor during his lifetime.

Protz recalled how Watts assisted with the purchase of his first new car.

“After about six months, he took me to Pollock Motor Company,” Protz said. “He said I needed a new car. He said you’re going to buy this car. I didn’t even pick it out — he picked it out.

“We drove it home and Imogene saw it, and she was happy with it. I still have that car. It was a ’71 Buick Skylark, and it still runs. First new car I ever had.”

The Protzes weren’t sure if they wanted to remain in Crossville during the early days of Paul’s practice.

“You had to know those people back then,” Protz said. “They were very protective of their community, who came in and who didn’t. Here I was a Northerner, let alone a chiropractor.

“The first fellow I met was James Gaines, the chief of police. He came in and took me all over town. He introduced me to R.P. Harris. We went into the fire station here and met William Swofford, Richard Wiggins, Richard Harbour and Prentice Roden. They accepted me real well, and we got to be real good friends.

Protz, who turned 72 in December, works three days a week. He’s been treating some of his patients since 1972.

“One of the first families I met was the Gilbreath family,” he said. “The Gilbreaths, the Chumleys … Liz Wheatley, her mom and that bunch. They really supported me back then.

“It really was tough back then. People would bring me things to eat from the garden, just all kind of things. People were really gracious to me.

“I’ve had patients and I still have them today that come from as far as Trenton, Georgia. I’ve got some good, dedicated patients. They come from all over.

Protz’s mother encouraged him to pursue a career as a chiropractor.

“My mother hurt her back and it was during Christmas, and she had to go to the hospital,” he said. “And when she got out, she wasn’t any better. She went to a chiropractor and he got her straightened out. I didn’t know what I wanted to do actually, and she suggested I do that.”

“My wife is also a chiropractor,” Protz said. “She didn’t practice here at all with me. She did practice some up in Stevenson after my brother, who was a chiropractor, passed away. Sometimes she doesn’t get the recognition that she needs to get.

“We’ve tried to serve our community too. I served two terms on the city council. My wife helped me coach baseball, just she and I, for eight or 10 years. I had a great time.

“I had the Tigers. I had George Walker, and Mike Bobo played for me. We had a good team. In fact, we beat Skin [Johnston] one year for the championship, and one of my thrills of my lifetime was to beat Skin Johnston. He was a good man.”

Judy Glenn and Vicky Trussell work for Protz. He considers the women as family members.

Glenn has been a member of Protz’s staff for 38 years. She’s a former secretary of the year for the Alabama State Chiropractic Association.

“I’ve got two good people,” Protz said. “I’m telling you, I couldn’t ask for better personnel than I have.